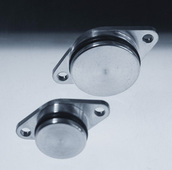 
The BMW diesel engines produced between 2000 and 2008 all have a particular design problem with inlet manifold butterfly flaps (commonly known as swirl flaps). Swirl flaps are used inside the inlet manifold of the BMW M47TU & M57TU diesel engines to vary the length of inlet manifold tract subject to load and anticipated demand. This allows optimum performance to be delivered (on a dynamometer!)
Back in 2000, BMW/Pierburg made a decision to manufacture those diesel engine swirl flaps from steel. BMW swirl flaps will commonly fail in such a way that they either: drop an affixing screw and or the upper section of spindle. If this does not stop the engine the remaining swirl flap falling completely in will! The outcome of such failure is not pretty in the slightest. Diesel engine’s piston cycles at least at 60 revs per minute, so an ingested metal piece fallen off the butterfly flap will be slammed by the moving internal components. Most often one or more piston ends up being severely damaged along with several valves, an injector and the cylinder head, with possible collateral damage spreading to the turbo as well?
Later; around 2004>, BMW addressed this fault; the swirl flap supporting spindle was increased in size along with the affixing screw diameter (we have seen vehicles registered up to 2007 with early type 22mm swirl flaps fitted). Despite the increased spindle diameter, numerous reports from customers all over the country of modified type swirl flap failure!

Option 1: Replace the inlet manifold every 2 years to be covered under the BMW warranty.

Option 2: Removing the swirl flaps. That will mean that both inlet manifold tracts are constantly open. The result: no perceived difference in performance or fuel consumption and cleaner running due to the elimination of ‘dead spots’ in the inlet tract. Once swirl flaps are removed voids of 22mm or 32mm are left in the manifold. These voids need to be sealed; that is where blanking plates CNC machined from super strong aircraft grade aluminum, fitted with new automotive grade ‘o’ rings. This is the only professional fix for this problem.

Contact us with your registration number for a quote for manifold replacement or manifold modification.